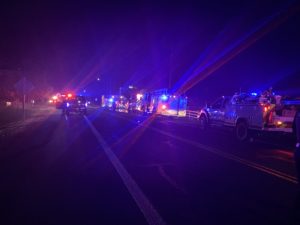 Jackson County Fire District 3 and 5, along with Ashland Police and Ashland Fire Rescue responded to the scene.

A spokesperson for Jackson County Fire District 5 says the fire was originally called in as suspicious smoke coming from the area.

He says fire crews followed the smoke to locate it.

“We got into the fire and called for second alarm, which brought more engines in. Put about 15,000 gallons on the fire and put it out,” said engineer for Jackson County Fire District 5, Bill Boylan.

Boylan adds fire crews got the fire out before it could reach a nearby home.
He says the barn is a complete loss and the cause of the fire is under investigation.