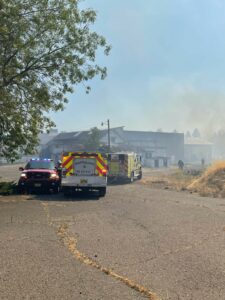 UPDATE 5:25 p.m. — The Oregon Department of Forestry says crews are starting to get a handle on the fire and are working on mop up. ODF says firefighters are also watching for spot fires, saying wind is a major concern.

MEDFORD, Ore. — Several agencies responded to a grass fire Sunday afternoon near I-5 milepost 31, near the Rogue Valley International-Medford Airport.

The Medford Fire Department says the roughly 5-7 acre fire is burning along both sides of the Bear Creek Greenway. It says homes and businesses in the area are being evacuated, including an RV park near the area. Jackson County Emergency Management issued a Level 1 ‘Be Ready’ evacuation alert for the nearby area, including the airport, just after 5 p.m.

Our reporter at the scene says Biddle Road is closed. ODF says people are asked to avoid the area.

ODF says the cause is under investigation. Stay with NBC5 News with more on the developing story.