MEDFORD, Ore — Attorneys for a man arrested in Medford earlier this year, are planning to file a lawsuit against the City of Medford over MPD’s alleged use of force.

The suspect, Noel Palomera-Vasquez, was arrested at the Circle K located on the corner of Barnett road just after midnight on January 25th. The City of Medford released a statement, alleging that Vasquez was high on methamphetamine at the time and didn’t comply with their demands.

The City stated Vasquez was “physically resistive” when officers attempted to take him into custody. During the exchange, MPD officers said it used “focused blows and a taser” to control the suspect. 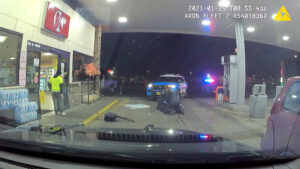 MPD added that an officer was injured during the exchange. An independent EMT later rendered physical aid to Vasquez for “abrasions,” and was taken to the hospital before being booked in the Jackson County Jail.

Vasquez’s attorneys, Matthew Rowan and Christine Herbert, declined to speak more on the case, but stated the video, “speaks for itself.” Rowan said they are drafting a tort claim letter to formally advise the City of their intent to enter into litigation.

Medford Police said the use of force was reviewed and determined to be in policy.

“The Medford Police Department’s use-of-force statistics are generally consistent year-to-year and force is used in less than 3% of arrests.” MPD said in a statement to NBC5.

Below is the official statement from the City of Medford:

Because of the ongoing criminal case regarding the suspect through the Jackson County District Attorney’s Office, the City’s comments at this time must be limited. Officers responded to the Circle K at Central Avenue and Barnett Road shortly after midnight on January 25, 2021. The caller reported a male behind the counter, subsequently identified as Noel Palomera-Vasquez, with a dog; notes of that call include a note that the dog “CAN BE AGGRESSIVE”.

The individual was physically resistive when officers attempted to take him into custody, resulting in an exchange on the ground. During the exchange, focused blows and a Taser were utilized in order to obtain control of the suspect. After the suspect was successfully restrained, at the request of Medford Police Department, he was immediately checked by independent medical personnel.

The suspect received some abrasions during the exchange and was taken to the hospital for evaluation before being booked at the Jackson County Jail. A Medford Police Department officer was also injured in the exchange