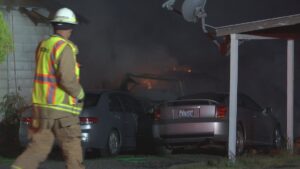 APPLEGATE, Ore. — A new fire is 100% fully-lined, after a crash between a motorcycle and vehicle sparked flames.

Multiple agencies responded to a crash near the 10000 block of Upper Applegate Road around 11 a.m.

Firefighters say the motorcycle caught fire, which then spread onto the nearby land.

The Jackson County Sheriff’s Office says the vehicle driver is okay, but the motorcyclist was hurt and transported to hospital via Mercy Flights.

Applegate Fire District 9 and Oregon Department of Forestry responded to the fire, which burned 10 acres.

More information on the drivers and fire will be released when the crash investigation is complete.