EAGLE POINT, Ore — A family in Eagle Point continues to search for answers from the City, after they were nearly killed when a car crashed into their home.

Michelle Schmidt says the crash happened at their home at Idlewood Mobile Park early Sunday morning on April 18th. The home remains detached and the fence is torn. 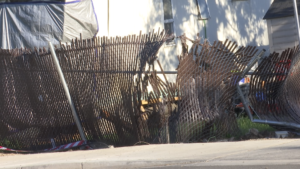 Her father in law was unconscious from the impact and was later diagnosed with a concussion.

“I’m scared,” Ralph Champlain, father in law of Schmidt, told NBC5 about staying at the home. “There’s no protection at all and it could happen again.” 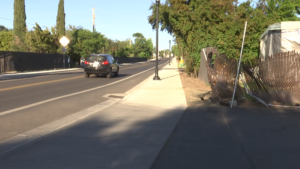 The Park is located near Idlewood drive and Stevens road.  Schmidt says there used to be a boulder protecting the homes on the corner from drivers crashing through.

“Once they redid the road, they took out the boulders which leaves our homes susceptible.” Schmidt said.

The family claims the Eagle Point Public Works Department agreed to place a barrier, weeks after the crash. However, they say the department told them this week that they will not make changes for liability reasons.

Schmidt hopes to gather enough signatures from the community to get the City to make it safe for residents in the area.

“We’re hoping to get enough petitions to where they’ll listen to us, and do something about it,” Schmidt said. “Before someone else gets killed cause it’s just a matter of time.”

The Public Works Department did not immediately return our request for comment on the situation.