EAGLE POINT, Ore.- Late this morning, a small plane crashed in a field in eagle point. While the two men inside the plane survived, we still don’t know much about the circumstances surrounding the crash landing.

At 11:48 Thursday morning, a plane crashed and burned in a private field in eagle point.

Police say the two people on board, men in their mid-twenties, exited the burning aircraft on their own. They were taken to a local hospital with injuries.

“The information we have at this point is that the injuries are not expected to be life threatening and some of the injuries are reported as serious,” Moran said. Though Jackson County Fire District 3 responded to the scene, and the plane suffered extensive damage, there was no fire threat to the surrounding area.

“There appears to be no fire damage beyond the aircraft itself. There may be some small amount of damage to fencing.”

The sheriff’s office doesn’t have any information on what caused the crash yet, or any details on the small fixed wing aircraft.

“Deputies arriving on scene found that the aircraft was an older style similar to a piper cub. It’s yellow in color,” Moran explained.  Federal aviation officials will begin investigating immediately.

“Our deputies are in touch with the FAA and the National Transportation Safety Board, briefing them on what has occurred. Whether they will respond or not we are not sure,” Mike Moran said The men are from the southern Oregon area and were believed to be on a local flight.

Neighbors tell NBC5 News that area is a popular spot for student pilots to practice but it is unconfirmed whether either passengers were student pilots. 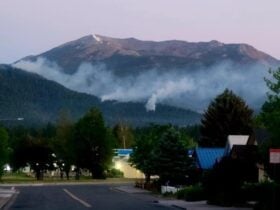 Wildfires near Mt. Shasta held at 12 acres in size