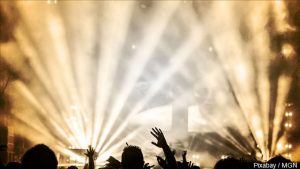 Central Point, Ore. — Wednesday morning Jackson County Commissioners approved an application to allow RV and tent camping on land off Upton Road just north of the Expo to prepare for the possibility of a large music festival. Something Central Point city officials say would bring in a lot of money.

There’s a possibility that a four day country music festival will be coming to the Jackson County Expo in July 2017.

“We still have a couple contracts that are out there to be the deciding factor on whether this event will take place here but we’re positive we can find some mutual ground and make sure this happens for this area,” said Anne Hankins is the President of Willamette Country Concerts LLC. Along with Bi-Mart they put on three camping and music festivals every summer bringing more than $60,000 country fans to the northwest. And now they’re working to bring the music to Central Point.

The four day festival could bring in 20,000 people a day.

The Director for the Expo, Helen Funk, says it will only enhance something the Rogue Valley already does well, “We are great with entertainment. If you look at not only the great things I can do at the Expo with things but also our Britt Festival as well as the Holly, the Craterian, Shakespeare, everyone stands to gain from this.”

Those festivals bring in some big name stars to Oregon. Headliners this year include Miranda Lambert and Brantley Gilbert.

Again, the festival has not been approved as they work to smooth out some more contracts but we should have a final decision in the next week. And if everything goes to plan some headliners could be announced in the next month.

Count on NBC5 to continue to bring you details as they become available.