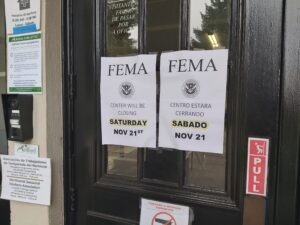 The federal agency set up there for nearly two months, providing resources to residents impacted by the local wildfires in September.

They had around 25 people come in for help every day they were open.

Facility Manager, Peter Fraenkel, said he wanted to make sure this office was open, welcoming and organized to anyone coming in.

He said the workers are from all over the country and everyone who came to the center for help were understanding and appreciative.

“When people find out we’re here, left family and we’re just here just to help them out, that adds a little bit more to the appreciation that we’ve left our family and came here to help out,” Fraenkel said.