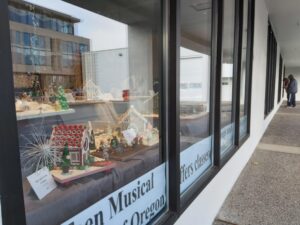 MEDFORD, Ore. — Auctions are open and gingerbread is on display.

The annual Gingerbread Jubilee put on by the Craterian is another event to go virtual.

All of the gingerbread creations are on display in the windows of the Collier Center on Fir Street in Medford.

Event organizers said they weren’t even sure the jubilee would be possible this year.

It’s hard to capture the same excitement and urgency in the room at an auction night, but more people are involved with it online.

“The cool thing is, Mr. James Morrison Collier is matching dollar-for-dollar what we raise, so we’re hopeful that people will feel excited that anything they give will be double and we’ll be able to build some momentum that way,” Development Director, Aspen Droesch, said.

There are 45 entries, one of the most participated in recent years, with online auctions closing tomorrow (Sunday) night at 9.

Find the auction and see the creations