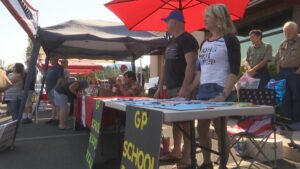 GRANTS PASS, Ore. — One of the former Grants Pass educators recently fired by the district spoke at a small rally today.

She says the Grants Pass School District is stripping her of her freedom of speech and rights.

She and former North Middle School vice-principal, Rachel Domiano, made those claims in a federal lawsuit against the school district.

The school board says it voted to fire the educators for using company time and resources to work on their personal project.

A table at the rally gathered signatures for petitions to recall school board members Cliff Kuhlman and Brian Delagrange.

Medart declined to comment further on the situation as the legal battle continues.