MEDFORD, Ore — On the first day of the Southern Oregon Golf Championships, a local family of four generations reunited Tuesday and are preparing to compete this week. 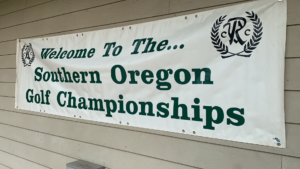 The championship is the largest amateur match-play golf tournament in the United States. It’s second behind Canada for the largest globally.

Medford community leader Chuck Mettler first participated in the tournament back in 1968. His two sons, Rich and Dave, played golf for several years where Chuck was a caddy for them up until two years ago.

The family had lunch at the Rogue Valley Country Club, a day before they face off in the qualifying round Wednesday. 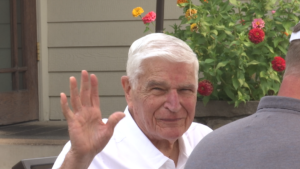 “This is a great time for us to all get back together,” Dave Mettler, son of Chuck told NBC5. “[Chuck] just turned 89 this year, and he’s kept the tradition alive. He’s just been a big part of our lives and manages to stay connected with everybody.”

Rich’s three children, Scott, Jensen, and Molly are in the tournament, along with Dave’s daughter Genna Mettler.

Scott says his motivation is to always come back to the event, and improve in his qualifying section.

“It’s kind of like the Super Bowl of our season, and we just love to come out and play some match play,” said Scott.

The event is Jensen’s first tournament and says he’s more than ready. 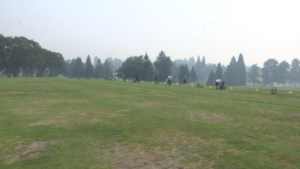 event and a party,” said Jensen.

Molly is entering her second year in the tournament and is aiming to beat her qualifying score from last year.

“I may have had the highest qualifying score last year, so I’m hoping to get a little under that,” Molly said. “Anything would be better than that. Even if it’s just a stroke I’m happy with it.”

Their cousin Genna is gearing up for her 7th year at the match. She used to play at Oregon State University, before her coaching stint at a school in Corvallis.

The smoke blanketed the Rogue Valley Tuesday, but Genna said she’s ready to compete and keep the tradition alive, despite the bad air quality.

“It won’t stop the fun and the good times, so we’re excited,” said Genna.

The Mettler family is looking forward to competing as a whole this week and keeping the tradition alive, as their grandfather cheers from the sideline.

“Grandpa Chuck I think is the world’s best cheerleader,” Genna said. “He’s definitely our inspiration and our team mascot.”