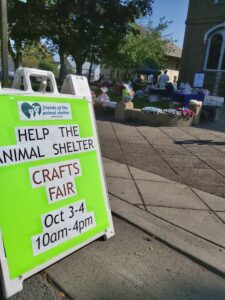 JACKSONVILLE, Ore. — The first fundraising event of the year for Friends of the Animal Shelter was held at  Jacksonville City Hall Sunday.

All of the shelter animals were saved from the Almeda fire as well as the shelter facilities, but there are still many things they need help paying for like spay and neutering and building improvements.

“Deck the Paws” and all other fundraisers were postponed because of the COVID-19 pandemic, but that’s helped this event have more items to sell.

“We really had great support from the community both coming to help set up, service cashier, and come out donate and buy things,” volunteer and event coordinator, Laura Ahearn, said.

“I’ve lived here for only five years and that’s what drew me here,” volunteer, Sunny LeGrand, said. “The generosity of spirit of the Rogue Valley is pretty dog-gone awesome! There’s just something about human nature in the way we love our companion animals. We’ve had people walk by and we say ‘You’re welcome to come in’ and they say ‘No no, I’m just going to do this’ and they stick money in the jar. I’m going ‘Thank you. However you do it, we love you for it,'” LeGrand added.

Volunteers said they were happy with how much was raised, but no dollar totals are available at the moment.