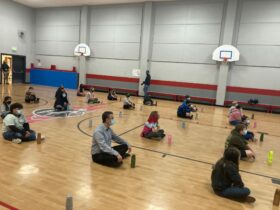 She put in about 80 hours organizing the animal clinic where two presenters from California and two from Oregon are set to demonstrate online, but it was originally arranged to be at the Jackson County Fairgrounds.

The video presentations will cover nutrition, selection, fitting the animal and showmanship, as well as live Q&A sessions for attendees.

She says it was an “animal” to put together and even though it can’t be in person, this is the next best thing.

“Our demonstrators have put a lot of time into the videos and great detail into it, so they will be able to gain almost the same information and be able to attain it pretty easily,” McMahan said.

Arielle’s mother, Tamara, who is also her girl scout leader, keeps herself busy with organizing annual holiday bazaars in Eagle Point which helped give Arielle the inspiration and confidence needed to put together such an involved event.

“She saw the amount of work that goes into it and knew what she was getting into before she even started it,” Tamara said.

Tamara is proud to see her take charge of this project because it could have easily been canceled.

“She looked at me and said ‘Mom, that’s just not an option for me.’ So, I was super proud of her to make it happen on the date and not letting anything get in her way,” Tamara said.

Links for the event and to register:

Registration (registration is free and must be done by 10 p.m. Saturday night (18th)