ASHLAND, Ore — With more than four million dollars in funding from Project Turnkey, the new Options for Helping Residents of Ashland navigation center, is welcoming more people in need.

The old Super 8 Motel was converted into temporary housing, specifically for homeless people and those displaced because of the coronavirus pandemic and last fall’s fires.

“It’s a major blessing,” Robert Nicks who recently moved into the OHRA Center said about the staff. “They know what people’s needs are, they recognize that and address it… They’re really great people.” 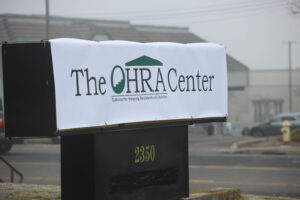 During the winter months, Nicks spent many nights outside in the rain and in freezing temperatures.

“All winter long, its been a nightmare.” Nicks said.

The OHRA Center is gradually opening new rooms as it continues to renovate. As of Thursday, 30 rooms have been made available with more expected to follow.

OHRA officials say its their first navigation center that will be open 24 hours. Once renovations are complete, community partners will help residents with several needs – ranging from medical care to applying for jobs.

“A really exciting piece to help remove those barriers,” Cass Sinclair who is the Senior Director and soon to be Executive Director with OHRA said. “It will get people moving from crisis to stability.”

The OHRA center plans to add an elevator and extra space to allow for 53 more beds as it continues to expand.