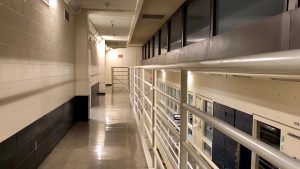 JACKSON COUNTY, Ore. —For the last six years, the Jackson County Jail has reported the highest amount of releases due to overcrowding in the state. JCSO says from 2016 through 2021 its jail has averaged more than 5,000 overcrowding releases per year.

The over 30,000 forced releases are the most overcrowding-related releases reported from any jail in Oregon during this time period. Starting Wednesday JCSO will provide updates on social media showing a snapshot of the people recently released from the Jackson County Jail, due to overcrowding.

This information can be seen through social media, including the total number of adults-in-custody released that day as well as their individual charges. More than half of the jail’s population is ineligible for pre-trial release due to the nature of their charges, according to JCSO.

The jail’s been overcrowded for years. Sheriff Nathan Sickler attempted to get public support for a new facility in the May 2020 election. The measure overwhelmingly failed, with more than 70% of voters opposing the tax. The timing may have played a role, as the pandemic had just begun.