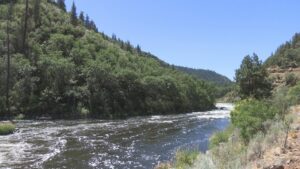 UNTY — An agreement was reached yesterday to remove the 4 dams along the Klamath River in Klamath and Siskiyou Counties.

While the states and affected tribes are behind the move, some ranchers are not.

The Klamath Water Users Association is not taking a side, but says some ranchers will be hurt if the dams are removed.

According to the KWUA,  downstream property owners could see some flooding, and other sediment control issues.

“We feel like there are still some important things to be done to take care of the irrigation community, and there are things that the other parties of the dam removal agreements have committed to carrying forward, but those things have not yet been realized,” says Paul Simmons with KWUA.

The project  is set to begin in 2022 with dam removal in 2023.  For more information you can visit klamathrenewal.org.