LAKEVIEW, Ore — Evacuations are in place for the Patton Meadow fire in Lake County according to the South Central Oregon Fire Management Partnership.

“This afternoon’s thunderstorm activity, including dry lightning in Klamath and Lake counties, resulted in two new large fires that the agencies (SCOFMP) are fighting.” SCOFMP officials said in a release.

The Patton Meadow fire was reported just before 3:30 p.m. Thursday afternoon and quickly jumped to 2,000 acres.  It’s burning about a mile and a half northwest of Booth State Scenic Corridor Park. 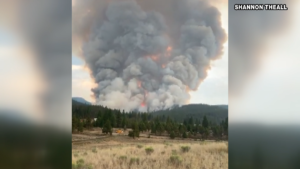 The Willow Valley fire, also caused by dry lightning, started shortly after near the Oregon-California Stateline. The 300 acre fire is burning east of Willow Valley Reservoir and 16 miles southeast of Bonanza.

No evacuations are in place for the Willow Valley fire, though residents in the area are asked to closely monitor the situation and be prepared to leave when necessary.

For the Patton Meadow fire,

Level three “GO” evacuation orders are in place for:

Level one “Be ready” notices are in place for East of Lower Cottonwood road and Cottonwood Creek.

Lake and Klamath county residents are still encouraged to sign up for the state’s new OR-alert system for fire evacuations. The link to sign up can be found here: Everbridge