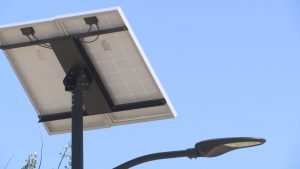 MEDFORD, Ore. — Medford Parks and Recreation is trying to make the Bear Creek Greenway safer by adding solar street lights to it.

Two solar street lights were installed Thursday evening as a pilot program to test how the lights work.

Rich Rosenthal with Medford Parks and Recreation says the greenway currently doesn’t have consistent lighting throughout it and that leaves some portions extremely dark.

The city of Medford has a budget of $300,000 allocated to Bear Creek Greenway enhancements. The department wants to allocate a little more than $188,000 of that budget to install pathway lighting.

The installation would stretch nearly 2.5 miles between Barnett Rd. and McAndrews road to light up the downtown portion of the greenway.

If the project is approved by Medford City Council at the next study session on Thursday, July 25, then Medford Parks and Recreation will move on to installing 57 more lights.