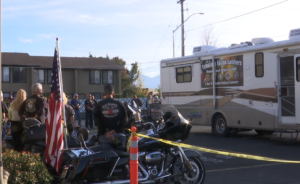 Eugene-based Tribute To Fallen Soldiers began their 11-day ride to Indio, California on Thursday, stopping at Eagles Lodge #2093 in Medford first. In years prior, the group started in Eugene and traveled to Arlington National Cemetery in Virginia – making stops in different states to honor about 70 fallen veterans.

Warren Williamson, executive director of the organization, told NBC5 that they wanted to go a different route this year and honor the service members killed in Kabul, Afghanistan in August.

“We’re doing it to remember those fallen 13 service members who died in the suicide bombing, in which four of them are [on our route],” Williamson said. “To see the amount of work the local community has done here in Medford is overwhelming. All of the wonderful patriots [at the event], veterans who served outside to greet us as we came in, it was something special.”

Part of their journey is the lighting of a memorial torch. The group stopped at the lodge with a police escort, to remember Army Sergeant Branden Kimball from Central Point – who died in Afghanistan in 2020 from a non-combat related incident. The organization gifted his family a 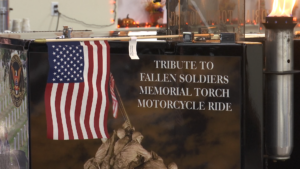 “It’s just a reminder that we haven’t forgotten that there’s still a lot of good Americans out there that we’ll never forget,” Williamson said. [The torch] never goes out. It represents the life, spirit, and sacrifice of the service of each of those service members we’re honoring.”

More information about the organization can be found here: Tribute to Fallen Soldiers