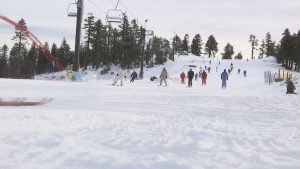 He says the ‘telemark turn’ is the most famous part of the technique, which was developed back in the 1800’s.

“Most people just would point it down hill and would use their skis as snowshoes for over the snow transportation, and it was the style of dropping the knee, the signature of the telemark turn,” said Towle.

He says people who came to Mt. Ashland dressed in costume to commemorate World Telemark Day were given ski passes and other small prizes.

He adds around 100 people participated.