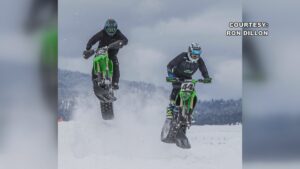 The race director, Ron Dillon, says there are about 50 participants in the races. The races include a mix of snow bikes, snow mobiles and 4-wheelers.

He says the race has the most spectators in event history, with 500 tickets sold.

“People are so tired of being cooped up, they’re just dying for something to do. I think there’s people here who couldn’t care less about snow bikes or 4-wheelers, they just want to get out and do something,” said Dillon.

He says this the 5th year the series has been hosted at the resort.

He says it’s the only snow bike race series hosted in Oregon, Washington and the Cascades each year.