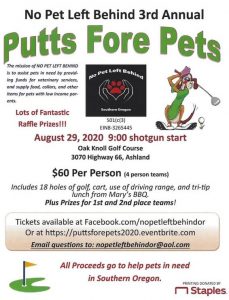 About 85-percent of the costs for the non-profit, No Pet Left Behind, goes to medical bills so money is what’s needed most.

“Putts Fore Pets” is an annual fundraiser at Oak Knolls golf course for the non-profit.

Organizers say it’s an event for everyone at any skill level.