Crews responded to the Village Apartments on the 700 block of Royal Avenue just before 9:00 p.m. Residents were forced to evacuate, and neighbors in the area reported seeing flames from the apartment from a distance. 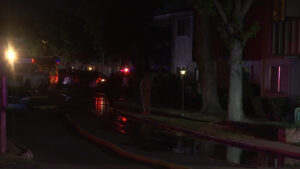 Medford Fire Rescue said one person was taken to the hospital with burns.

The fire has been knocked down and the cause is under investigation.

This remains a developing story and more details will be released, as it becomes available.