SOUTHERN OREGON — Local leaders in Rogue Valley continue to fight for racial equality, as they reflected on one year since the murder of George Floyd.

Tuesday May 25th, marked one year since George Floyd was murdered by former police officer Derek Chauvin. Chauvin was convicted in April on all three counts of second-degree murder, third degree murder, and manslaughter.

The more than nine minute video that showed Chauvin’s knee on Floyd’s neck, sparked unrest and calls for change across the nation. Protests were held in cities like Medford, Ashland and Grants Pass.

“First thing that popped in my mind when I saw the video was how sorry I felt for [Floyd] and his family,” DL Richardson, Equity specialist with Medford School District and activist with Black Southern Oregon Alliance, told NBC5. “Secondly I said to myself, here we go again.”

Ashland’s Chief of Police Tighe O’Meara, condemned the actions of Chauvin, and noted the importance of changing the system.

“Any police officer who exhibits what [Chauvin] exhibited that day, has to be held accountable,” O’Meara said. “No one’s above the law.” 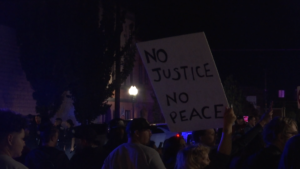 Within the past year, several police reform bills passed through the Oregon Legislature including a ban on chokeholds.

Richardson and Ashland High School assistant principal Becca Laroi, continue to organize community events and conversations on race even in school. Laroi says its critical for people to understand the harm for BIPOC (Black, Indigenous, and People of Color) students when there’s a lack of representation in their community.

“You need to change hearts, and we need to put policies in place,” Laroi said. “Especially when people aren’t ready to hear that, or when its not speaking to them personally yet.” 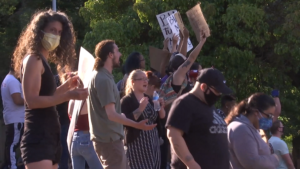 “Talk is not enough, we can always be sorry but after a while, I don’t care about you being sorry,” Richardson said. I wanna see what you’re doing about it. I think we are at the point of moving and having us not just talk about making a change, but actually doing it.”