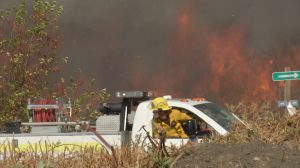 The 100-acre fire caused evacuations near the Jackson County Expo, putting hundreds of lives at risk. It destroyed homes and claimed the life of a homeless man along the greenway.

The cause of the fire is still under investigation one year later, though fire officials said it started near a transient camp. High winds made the fire unpredictable as it traveled quickly east toward neighborhoods.

Agencies from across Jackson and Josephine Counties came to help. Firefighters said the damage to nearby properties could have been much worse, had it not been for everyone involved.

“The fire started somewhere along the bike path near the family fun center,” said Jackson County Fire District 3 Battalion Chief Mike Calhoun, “and with the wind, the dry conditions and the heat, low humidity, it just kind of exploded from there.”

Several agencies have worked to rehabilitate the land since then, re-seeding plants and removing harmful vegetation like Himalayan blackberries.

The agencies involved say it will take about 10 years before healthy habitats can fully form.