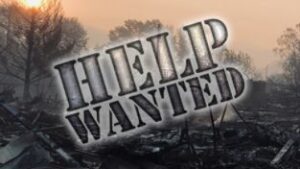 MEDFORD, Ore.– The devastation of this years fire season has caused a lot of heartache and the loss of millions of dollars in property.

However, a representative from the Oregon wildfire recovery task force is saying several jobs are being created to help in the fire cleanup.

Spokesperson Angela Beers-Seydel says the state is in the process of hiring on multiple levels to help cleanup the 2020 fires.

She says contractors are hiring and also being hired to get all burnt areas safely repaired.

She says the need for extra hands is widespread across the state.

“This has been so hard on people. This is an unprecedented event and that’s why we’ve come together as a state to say ok, how can we make this work.”

She says so far, the state has hired 5 prime contractors some of them from out of state to handle hazardous tree and debris removal.

One local contractor is Ashbritt Environmental.

Each contractor is responsible then hiring subcontractors, and from there, individual employees can be hired.