0
Share
YREKA, Ca. — Hundreds of people gathered in the streets of Yreka this afternoon to demand justice for a man recently killed in an officer-involved shooting by police.

35-year-old Soobleej Kaub Hawj was shot dead by police on June 28th when evacuating from the Lava Fire.

They claim Hawj was unjustly murdered.

“We are right now facing racism against our community, myself, I am Hmong, all our people here are Hmong people,” said national activist, Paula Yang.

She drove up from Fresno, California to demand transparency and an explanation for Hawj’s death.

She says 60 rounds were fired into Hawj’s truck, while his wife and 3 children witnessed the shooting as they evacuated behind him.

“We don’t even know where our deceased, our loved one is at. It’s been 20 days. Typically, in my culture, we have to bring our deceased home so we can do a proper burial.”

The Siskiyou County Sheriff’s Office told us back in June that Hawj was told to stop his truck. 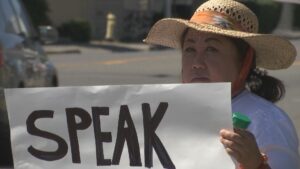 Police said he pulled out a semi-automatic handgun and 4 deputies opened fire on him. People at the march say eyewitnesses at the time didn’t see Hawj pull out a gun.

“The police said he had a gun, the fire department said he didn’t and now we’re at the crossroad of ‘can we get a body cam?” Said Yreka resident Dominic Hill. He says the whole situation leaves him angry.

“I feel sorrow for that, I feel dread, I feel nothing but angst for that family,” he said.

The march concluded at the Siskiyou County Courthouse where activists addressed the crowd.

“We have to step up and let a third party investigate into this case for our people so that they can be at peace,” said Yang.

As a nation, we pride ourselves on the ability to freely express ourselves and assemble peacefully.

All Officer Involved Shooting investigations are complex and take time to afford the proper due process to everyone involved. Mr. Kaub, his family, the involved officers, and witnesses are owed a thoughtful, comprehensive investigation to determine, conclusively, the facts we all seek. Please be understanding with us to allow the investigators time to finish the investigation. As mentioned before, the investigation is being conducted by a local Critial Incident Team from local law enforcement agencies that is being led by the Siskiyou County District Attorney’s Office.

With four involved officers from three different law enforcement agencies and numerous witnesses to interview, the investigators have a tremendous responsibilty to investigate this matter without rushing. All human life is valauble and that is why the circumstances surrounding Mr. Kaub’s death must be determined through a comprehensive investigation. Releasing information prematurely can have negative consequences that may compromise the investigation.

We continue to ask everyone to be patient with investigators and the process of determining the events surrounding Mr. Kaub’s death. Information will be released as soon as possible.