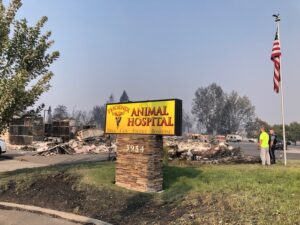 PHOENIX, Ore. — A place of healing for animals was lost during the devastation of the Almeda fire this week.

Things were frantic at Phoenix Animal Hospital Tuesday as employees worked to get animals back to their owners before evacuating.

Owner, Glen Winters, said the outpouring of support from the community has been both wonderful and overwhelming.

“I have clients who’ve reached out to me offering all their support and then I later found out, they didn’t mention, they lost their homes,” Winters said. “I wish they would worry about themselves. I am fine, I will get through this. It’s amazing people who have lost their homes and everything in it and they are worried about the animal hospital. I have a client who offered to clear the ashes of the burnt building so we could start building. It’s just an amazing amount of support. The thoughts and prayers are helpful as well, it’s just the emotional support that we need. The physical part will get done, it’s just the emotional part that’s tough to get through,” he added.

The Southern Oregon Veterinary Specialty Center in Central Point is housing house pets affected by the fire until their owners claim them.

It also has a GoFundMe page to help with care for the affected animals.

View the Facebook page for Phoenix Animal Hospital to find out what other vet clinics are helping their current clients during the rebuild process, which should take between four and six months.