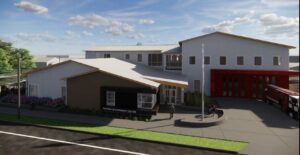 PHOENIX, Ore. —The city of Phoenix hosted a town hall for community members Tuesday night, to share plans for its new Government and Public Safety Center.

The purpose of the open house is to share the features and benefits of the center. It’s also an opportunity for the community to weigh in.

The facility will be a replacement for City Hall, the Phoenix Police Department, and Jackson County Fire District 5. The city manager says it’s going to be a facility that puts all those into one building, located on Second Street.

“There will be a presentation but we also want it to be a town-hall meeting where there are a lot of opportunities for the people to be present in the meeting ask questions of the designers, walk around look at project boards so we are able to get feedback and input from citizens on what we have come up with thus far,” said City Manager, Eric Swanson.

The meeting began at 630 at the civic center.

Swanson says construction is scheduled to start in May or June. It hopes to finish the project in December 2023.