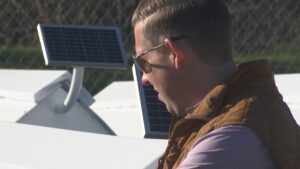 MEDFORD, Ore. — A republican gubernatorial candidate is making his way through the Rogue Valley this weekend.

The Mayor of Sandy, Stan Pulliam, is visiting both Medford and Grants Pass today before heading back up north as part of his 4-day statewide tour.

Pulliam says one of the main issues he would focus on as governor would be the violence, crimes, and riots in larger communities, as well as homelessness.

His stance on the approach was recently called out by another gubernatorial candidate, Rogue Valley businesswoman Jessica Gomez, who says she herself was formerly homeless.

“People who are living in that every day, that’s not a choice for them. They’re not making a conscious choice at that point and they’re not in a healthy place to take care of themselves, their families, and be a contributing member to the community,” Gomez told NBC5 News.

Pulliam says he wanted to see some of the services being provided across the state, specifically for homelessness, by touring Rogue Retreat’s Urban Campground and Kelly Shelter in downtown Medford today.

He tells NBC5 News, “Nobody is focusing on the criminal elements of living on the streets.”

“Every politician wants to talk about the mental health crisis, drug prevention – we need all those things – but we also need to be firm with those who will not seek assistance and help and that’s the way we would look to lead,” said Pulliam.

He wrapped up his tour late this afternoon in Grants Pass with a meet and greet at a local restaurant.

CORRECTION: This article was updated to correct a line with an incorrect statement about Pulliam saying violence was caused by homeless people.