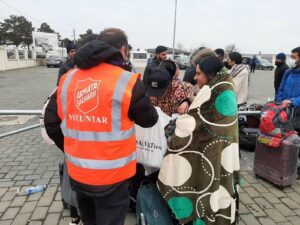 SOUTHERN OREGON, —As the war rages on in Ukraine, the Salvation Army is responding to the needs of the people being displaced.

We’re told the Salvation Army has ten locations in various cities across Ukraine.

It also has a presence in Romania, Moldova, and Poland.

Since the beginning of the conflict, the non-profit has assisted in efforts for those fleeing the violence.

It’s providing items like food, clothing, medical needs, and even temporary accommodations for refugees, as they travel to find safety.

“We’re doing everything we can to help alleviate some of those needs and help them to make it to a place that’s safe and healthy and secure,” said Major Randy Mulch with the Salvation Army.