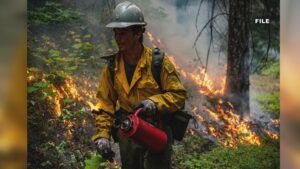 It would have provided money to help pay for damage caused by six fires that burned hundreds of thousands of acres in the Golden State. Among those six was the Slater fire which is burning in Siskiyou County.

The Slater fire tore through the town of Happy Camp and destroyed over 497 structures. As of early Friday morning, it’s 80% contained.

California Governor Gavin Newsom says the fires have cost the state $229 million this year. The fires have also caused 31 deaths.

The state plans to appeal the rejection for financial aid.