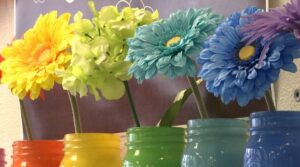 TALENT, Ore.– Principal Heather Lowe-Rogers said the entire faculty was nearly brought to tears this morning when they greeted dozens of K-3rd graders for class.

The entire district started a hybrid learning model Tuesday for the younger grades.

Mrs. Lowe, as she’s called, said the am-pm schedule at talent elementary is beneficial to both students and teachers.

Next week, 4th through 8th grade will return.

Lowe said this day tops any other first day back at school, in her eyes.

“For me, the most important thing has been seeing kids coming on campus eager to learn. Kids literally running, parents waiving in the bus loop saying, ‘how did it go?’ or ‘have a good day!’, everybody is just so elated to finally be here,” she said.

Lowe-Rogers tells me the hour between shifts is spent sanitizing entire classrooms.

She says the school has hired more custodial help to keep everything safe for kids.

The biggest challenge, she said, was figuring out how to transport displaced students all over the valley.

She says First Student has also hired additional help to accommodate the needs of district families affected by the Almeda fire.