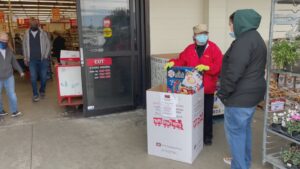 GRANTS PASS, Ore. — Toys for Tots kicked off its donations for Christmas Saturday at the Bi-Mart location in Grants Pass.

With many families displaced because of local fires this year and many others affected by a down economy, the hope is the donations will match the need this season.

“This program just reminds me there are a lot of good people out there and we are all just trying to do the best we can,” Public Information Officer with Rural-Metro Fire in Josephine County, Jes Webb, said. “When I see so many people in the community turn out to try and make a difference, it just renews my faith in humanity,” he added.

Toy distributions are set for December 20th and 21st at the Josephine County Fairgrounds.