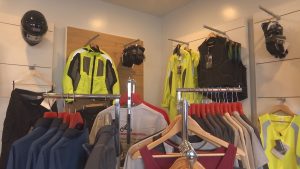 MEDFORD, Ore. — With the nicer weather, more people are trading their four wheels vehicles in for two.

Hansen’s Motorcycles in Medford said there are plenty of things both riders and drivers can do to stay safe.

Motorcyclists should be careful of road conditions, as there could still be sand on the roads which can cause traction problems.

“When it sees something unusual it asks the question, what is it? It just catches their eye and then that draws the attention that hopefully then they realize it’s a motorcyclist, and that’s what the bright color does,” said Craig Hansen, owner of Hansen’s Motorcycles.

Motorcyclists should avoid being in a car’s blind spots, but it takes two.

Hansen said it’s equally as important for drivers to check over their shoulders and mirrors to ensure no motorcyclists are close by.