Update, 4/16/17 at 3:31 p.m.: Oregon State Police say a woman was killed following a crash involving a semi truck on I5 near Grants Pass Saturday night.

Troopers say a semi-tractor was driving southbound near milepost 58, when the pedestrian was hit. Police say Leta Baertschiger, 54, was walking in the right lane for unknown reasons.

Baertschiger is the wife of Grants Pass based state Senator Herman Baertschiger. His office released a statement today:

“The Baertschiger family has suffered a tragic loss. They thank you for your thoughts and prayers during this difficult time and are requesting privacy.”

Authorities say the driver was unable to avoid hitting her, and has been cooperating with the investigation.

Both southbound lanes were closed for an hour following the crash, before one lane was opened. Both lanes are now open again.

It was first reported round 8:20 p.m. Saturday night, near milepost 58.

Details surrounding the crash and those involved are limited.

According to tripcheck.com, both lanes were back open by 11 p.m. Saturday night. 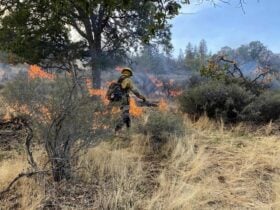