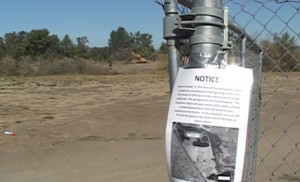 Central Point, Ore. — Work is now underway on a new RV park near the Expo. Gates are now up along the north end of the Jackson County Fairgrounds as crews transform the empty lot into a 92-space RV park.

County officials say the site will have all the bells and whistles for both travelers and residents.

“These are long slips, 75 to 60 foot slips where the RV’s can pull in, they’re going to have 50-amp power, water, sewer, Wi-Fi, this is going to be a nice park,” John Vial, Director of Jackson County Parks & Roads says, “This is going to be an attractive facility that people traveling the I-5 corridor will want to use.”

Crews say the park will be useable as soon as next summer, but work will continue through October 2016. People who use the fishing ponds in that area are asked to fish elsewhere until that work is complete.