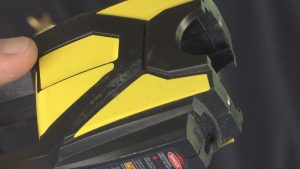 ASHLAND, Ore. — After months of waiting, the Ashland Police Department is getting ready to use some new equipment.

In August, Ashland City Council gave the department $354,000 over 5 years to get new tasers and body cameras.

Chief Tighe O’Meara says the tasers have a unique feature.

If activated, all body cameras within a 30-meter radius automatically turn on and capture what’s happening.

The tasers are also a yellow color, so Chief O’Meara says they will not be confused with a lethal weapon.

This week, the department will be learning how to use the new tasers.

The body cameras will arrive early next year.