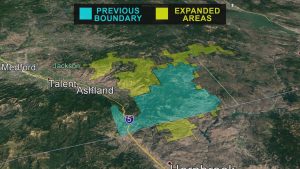 WASHINGTON, D.C. – On Wednesday, President Donald Trump issued an executive order calling for the review of America’s national monuments. Now, local politicians are reacting to a potential review of a monument in southern Oregon.

In June of 2000, President Clinton proclaimed around 52,000 acres in Jackson County as the Cascade-Siskiyou National Monument.

A little less than 17 years later, President Obama ordered the monument be expanded by approximately 48,000 acres.

The two proclamations would put the monument at about 100,000 acres.

President Trump’s order specifically targets monuments that were created after January 1, 1996 and are 100,000 acres or more

NBC5 News tried to confirm the exact size of the Cascade-Siskiyou National Monument with the Bureau of Land Management, but we were referred to the Department of the Interior. They have not replied.

While the size of the monument may or may not qualify it for review, language in the order could.

Jackson County Commissioner Rick Dyer said he hopes the monument gets reviewed. He added, “The autonomous or unilateral act of the President to designate lands in such large swathes like this without any meaningful input from the public we don’t feel is beneficial to anybody involved.”

In a statement after the order was signed, Representative Greg Walden (R-Hood River) wrote in part, “In Oregon we’ve watched the problems left behind in the wake of national monument designations that lock up land without meaningful public input. A review of the Antiquities Act is long overdue. I’m pleased that President Trump has finally ordered one.”

Senator Jeff Merkley (D-Ore.) argued there was extensive public input leading up to the expansion of the Cascade-Siskiyou National Monument, with a majority of public comments being in favor of the expansion. He said, “In Oregon, we’ve seen that national monuments like Cascade-Siskiyou have helped boost local economies while giving the flexibility for many traditional land uses, like grazing, to continue.”

The President’s order is a review and does not change any designations.

Jackson County Commissioners will discuss the Monument is Thursday’s meeting.