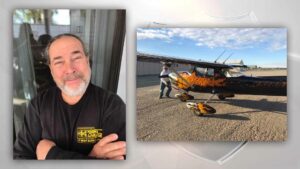 Update (10/22/21 3:49 p.m.) – Missing pilot William Bushling was found dead at the site where his plane crashed on Bradley Peak near Dunsmuir, the Siskiyou County Sheriff’s Office said. No further details were released.

Original story: GLENN COUNTY, Calif. – A missing plane may have been found after it and its pilot disappeared.

Action News/ Now reports William Bushling took off in a black Cessna 150 from the Ashland airport at about 10:00 a.m. Wednesday.

When he failed to land at his planned destination of Orland, California, the Glenn County Sheriff’s Office was made aware of the situation.

Law enforcement agencies in the areas of the plane’s departure and planned arrival were reportedly notified.

According to the Shasta County Sheriff’s Office, the plane was possibly last known to be in the area of southern Siskiyou County or northern Shasta County

The Siskiyou County Sheriff’s Office asked the community for help, writing, “If you heard or saw a low flying aircraft yesterday, October 20th between 11:00 A.M. to 7:00 P.M. from Highway 89 intersection of I- 5 south to Castella and along the I- 5 corridor east to Girard Ridge, please call the Sheriff’s Office. Please call the emergency number at (530) 841- 2900.”

On Friday morning, the Siskiyou County Sheriff’s Office said they received a report from a man who believes he found Bushling’s plane.

At the time this article was published, search and rescue crews were being deployed to the area. No further information was provided by law enforcement.

This article will be updated when more details become available.