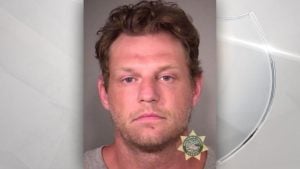 PORTLAND, Ore. (KATU) – An Oregon jury found a man guilty of intentionally running over and killing a black teen in 2016. Russell Courtier is now awaiting sentencing.

According to police, he got in a fight with 19-year-old Larnell Bruce Junior outside of a convenience store.

Then, police say Courtier intentionally ran Bruce over with his girlfriend’s Jeep.

Bruce’s death was designated as a hate crime.

Bruce is black and police say Courtier was wearing a hat linked to a white supremacist group when he hit and killed him. The state claims courtier is a member of an Oregon-based prison and street gang.

Christina Miles is the victim’s mother. She said of the verdict, “I feel wonderful, I’m so happy.”

Courtier’s former girlfriend, Colleen Hunt, has admitted to aiding and abetting Courtier. Witnesses say they heard her tell Courtier to do it. She pleaded guilty to first-degree manslaughter last week.