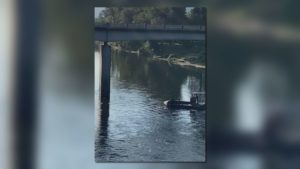 Grants Pass police say 30-year-old Gregory Jackson-Angus was attempting to escape from officers when he decided to jump into the river. Grants Pass Department of Public Safety said Jackson-Angus had warrants out for his arrest – several misdemeanors, including trespassing and criminal mischief.

Jackson-Angus ended up finding a shallow spot in the middle of the river near the downtown area and refused to come out. Police decided to use one of Hellgate’s boats nearby to get to Jackson-Angus and arrest him.

He was ultimately rescued and taken in without conflict. He’s now lodged in the Josephine County jail.