MEDFORD, Ore. – A man was sentenced for shooting at a local Bureau of Land Management employee.

The Department of Justice said in June of 2020, Scott Dye was told he needed to remove his bus that overturned on Bureau of Land Management property in Josephine County. In the coming days, Dye reportedly sought help removing the bus as he continued to camp in the area. 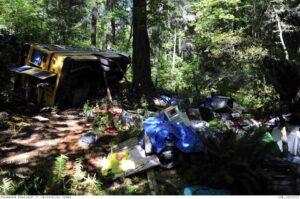 According to the DOJ, Dye told a BLM employee he was being harassed by civilians who didn’t want him there and he expressed his desire to move the bus as soon as possible.

On the morning of June 17, 2020, a BLM employee was driving a government vehicle on official business when he stopped to take some photos near Dye’s encampment.

Prosecutors said Dye fired several shots at the employee before they were able to escape with minor injuries from shrapnel.

Investigators eventually determined Dye was the shooter. He was arrested and charged with assaulting a federal officer, attempting to murder a federal officer, and using, carrying, and discharging a firearm in the furtherance of a crime of violence.

This past December, Dye pleaded guilty to assaulting a federal officer.

On April 26, 2022, prosecutors announced Dye was sentenced to time served and three years of supervised release. Dye was in custody from the time of his arrest in June 2020 until his release after pleading guilty in December 2021.