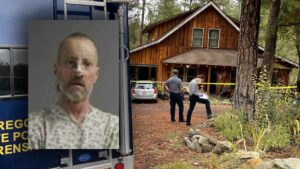 , Ore. — A man who allegedly shot and killed his wife before turning the gun on himself appeared in court Tuesday.

The Jackson County Sheriff’s Office said just after midnight on October 20, dispatchers received a call about a shooting at a home in the 3300 block of Little Applegate Road near Ruch.

When deputies and officers arrived at the home, they found a man barricaded inside.

A SWAT team and JCSO’s Crisis Negotiator Team tried to get the man to exit the home, but he refused.

At 2:49 a.m., a single gunshot was heard as the SWAT team entered the residence.

Lifesaving measures were performed on David Karnes and an ambulance took him to a local hospital where he was listed as in serious condition.

By November 9, Karnes was well enough to make a court appearance where he pleaded not guilty to second-degree murder.

Because of his medical condition, his pretrial conference was set back 90 days to February 14.