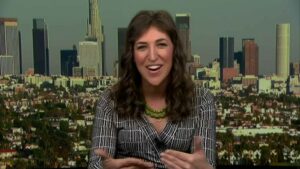 NEW YORK CITY (CNN) – And the next host of “Jeopardy!” is: Mayim Bialik! Well, temporarily, anyway.

Sources at the show say Bialik has been tapped to tape several weeks worth of the game show.

That comes after recently-selected host Mike Richards stepped down after offensive remarks he previously made on a podcast surfaced.

Bialik had been slated to only host “Jeopardy” prime time specials before stepping in to host the main show. But it may not be so temporary.

One source says Sony executives are considering making her the permanent host if she can figure out how to work on the show while also shooting her Fox sitcom “Call Me Kat.”

Mayim Bialik is best known for her starring roles on “Big Bang Theory” and “Blossom.”

She took more than a decade off from acting when she graduated high school and earned a PHD in neuroscience.