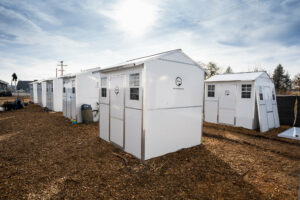 MEDFORD, Ore. — A Medford non-profit is asking for the community’s help to add more pallet shelters for the homeless.

That’s in addition to the 14 they have right now.

The shelters are temporary living spaces for the homeless located at the non-profit’s ‘urban campground’ off Biddle road.

The 14 pallet shelters already at the campground were donated in October by a Seattle-based company.

McComas says they’re next step is to get electricity to the campsite, so the shelters can be heated in these chilly temperatures.