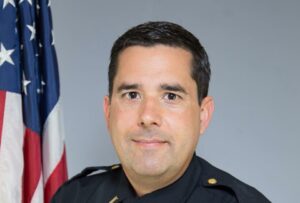 MEDFORD, Ore. – Medford’s police chief is retiring at the end of the year.

The City of Medford said MPD Chief Scott Clauson is retiring from the department effective January 1, 2022.

“This decision is bittersweet. The police department, as well as City staff, have become like a second family to me,” said Clauson. “This decision is largely due to the recent changes to the Public Employees Retirement System (PERS), specifically related to HB1049 that went into effect this year.”

“We have a very supportive community for police. I didn’t take this decision lightly. It’s just time and I don’t want my pension to be affected after putting this much time in,” he said in an interview with NBC5.

Clauson was hired as a police officer in 1995. He’s served in multiple units including the Crisis Negotiation Team, Financial Crimes Division, Gang & Street Drugs, and was a School Resource Officer. In 2019, he was appointed police chief. He also headed the city’s Livability Team, which aims to help people suffering from mental health and substance use.

“Chief Clauson has lead our police department through some difficult challenges over the past two years,” said City Manager Brian Sjothun. “I am tremendously grateful for his leadership and support as we’ve navigated a global pandemic, social unrest, and implemented new public safety initiatives such as the Livability Team. His commitment to the City of Medford and the Medford Police Department has been incredible.”

The city will begin the hiring process for a new police chief within the next couple of months.

“I am extremely grateful for the many opportunities and support that the City has extended to me. That support has allowed me to have a vibrant and fulfilling career. It has been a privilege and honor to have served this community over the past 27 years,” said Clauson.