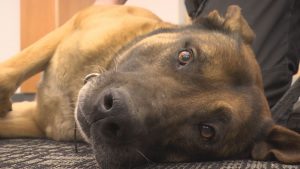 MEDFORD, Ore. —  After 7 years of serving and protecting, the Medford Police Department is saying goodbye to a beloved member of its team.

Kelso, a malinois from Holland, is turning in his badge.

After some intensive training, Kelso moved into his role as a “patrol dog.”

Some of his duties included sniffing around for discarded evidence at crime scenes, and searching for “bad guys.” During his 7 years of service, he tracked down 100 of them, many of which, the agency says wouldn’t have been possible without him.

Kelso was having some health issues and nearing the age of 13.

He’ll be going home with a member of the force he worked with to become a stay-at-home dog.

The Medford Police Department says they’ll be training another dog to fill his role in the next few weeks.