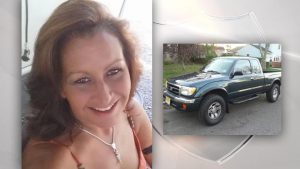 TALENT, Ore. – Jackson County Search and Rescue officials are asking for the public’s help in locating a missing Ashland woman.

Foster was last seen wearing a camouflage jacket, a black Puma t-shirt, blue jeans, and black and white Nike shoes. Her hair was in a ponytail and she was wearing the same necklace as pictured.

On Thursday, search and rescue team worked on searching roadways and rural areas in the Ashland area.