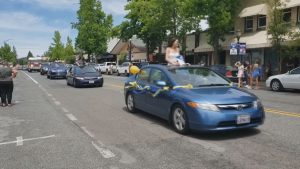 MOUNT SHASTA, Calif. — Members of Mount Shasta High School held a drive-by parade for the graduates of 2020 on Friday.

The parade was in lieu of a graduation ceremony, which was not possible due to the coronavirus pandemic.

The Mount Shasta Police Department says it was asked to block of parts of the road for the parade and the agency was happy to oblige.

It says around 50 to 60 cars drove by with crowds cheering from the streets of downtown Mount Shasta.